Drinking water quality is something we take for granted in the UK but it is still the preoccupation of Water Safety Group team members, microbiologists, site facility managers and water hygiene technicians because we now understand the greatest risk to human health is from waterborne pathogens, viruses and infections largely between water entering our building and the building water distribution system in it, as well as the last few metres before point of delivery (taps, showers etc).

Choosing the right water disinfection method or multiple technologies used together, is vital in order to appropriately protect patients, your workforce and building visitors. In addition, site operators and managers are required to:

This is especially relevant for but not limited to:

There are nine key criteria we use to help determine which technology is best suited to protect your water. 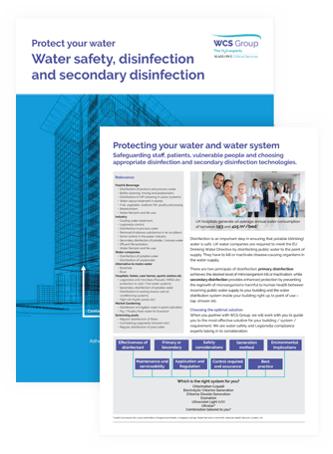 The two principles of disinfection

There are two principals of disinfection: primary disinfection achieves the desired level of mircroorganism kill or inactivation, while secondary disinfection provides enhanced protection by preventing the regrowth of microorganisms harmful to human health between incoming public water supply to your building and the water distribution system inside your building right up to point of use – tap, shower etc.

Deciding which technology or generation system is right for you hinges on your objective, application, water usage, flowrates, preference and tolerance of generation method as well as other criteria.

Selecting between some of the most common technologies such as traditional Sodium Hypochlorite, Chlorination and Hypochlorous Acid Generation, Chlorine Dioxide Generation, Ozonation, Ulraviolet Light (UV), Ultralox40®... requires specialist advice and in all likelihood a combination of technologies may be more suited tailored entirely to your site / building / water distribution system.

The eBook (free download) is an introductory reference tool that helps you compare some of the most common disinfection techniques:

Sodium Hypochlorite (NaOCI) is one of the most commonly used compounds for water purification, especially across large scale surface purification, bleaching, odour removal and water disinfection in cooling towers for example.

The GENOX generator produces a colourless liquid which is generated on-site, on-demand without buying, mixing or handling toxic chemicals. Direct electrolysis of brine, creates an oxidant NEUTHOX® on demand.

A universally effective primary and secondary disinfectant without the usual limitations of chemical mixing, handling or storage.

Ozonation is a water treatment process that destroys microorganisms and degrades organic pollutants through the infusion of ozone, a gas produced by subjecting oxygen molecules to high electrical voltage.

Ultraviolet (UV) radiation is generated by a special lamp. When it penetrates the cell wall of an organism, the cell’s genetic material is disrupted and the cell is unable to reproduce.

To learn more about each and advantages, limitations, process, equipment, chemicals and usage guidelines, download the eBook.

Complete systems for EVERY requirement.