Twenty years ago this August in Barrow-in-Furness, Cumbria, seven people died, and 180 people became ill. The sickness was caused by an outbreak of Legionnaires’ disease at a public leisure centre. It was caused by a poorly maintained air conditioning unit and the resulting spread of legionella bacteria through aerosols. Fortunately, the incident in Barrow served as an advert for future Legionella prevention—and has possibly saved many lives.

The trial focused on Gillian Beckingham’s duty to maintain the air-conditioning unit in the leisure facility. The prosecution alleged she was responsible for cancelling the maintenance contract for the unit. This meant that no legionella testing was carried out for a period of time. Also, a second maintenance contract was signed, but it did not include a water treatment regime. These actions—it was alleged—seriously compromised the health of the centre’s users.

After the court case, Gillian Beckingham was acquitted of the manslaughter charges against her. However, she was found guilty of a breach of Section 7 of the Health and Safety Work Act 1974, which states that employees must ‘take reasonable care’ for their own health and safety, as well as the health and safety of others who may be affected by their acts or omissions at work. She was fined £15,000.

Although the manslaughter charges against Barrow Borough Council were dropped, it was fined £125,000 for breaching Section 3(1) of the Health and Safety Work Act 1974. Section 3(1) stated that ‘It shall be the duty of every employer to conduct his undertaking in such a way as to ensure, so far as is reasonably practicable, that persons not in his employment who may be affected thereby are not thereby exposed to risks to their health or safety’.

The judge said the fine would have exceeded £1m if the guilty party had been a private company.  It was also ordered to pay prosecution costs of £90,000.

Lessons to be learnt

Greg Davies was an expert witness during the trial. Safety & Health Practitioner reported that after the trial, he said: “There are lessons to be learnt from this case, which have clear implications not just for middle management but director and board level too. What comes across strongly is the need for top-level commitment for clear and relevant management systems, coupled with effective training.”

The trial made it clear that carrying out a legionella risk assessment is of the utmost importance. People responsible for buildings cannot assume that systems are working correctly.

A public inquiry and report

Four years after the outbreak, two public meetings were held to help the public understand more about how the tragedy had happened and what subsequent changes had been made. As a result of the meetings, a report was published, which aimed to help people with a legal duty to benefit from the findings of the investigation. It listed six failures at the leisure centre in Barrow as well as recommendations to prevent future outbreaks of Legionnaires’ disease. The good practice suggestions below are current industry recommendations.

A lack of leadership meant that people did not understand the risks associated with legionella. Also, no one ‘responsible person’ was appointed to take control for water treatment and preventative controls.

2. Failure to act on advice

Despite a contractor having identified the lack of health and safety risk assessments, Barrow Borough Council failed to pay heed to their advice.

The report recommended that systems need to be in place to support effective monitoring and reporting to ensure leaders are being kept informed about any significant health and safety failures. In addition, effective management of health and safety risks depends on the active participation of workers and cooperation between all individuals.

3. Failure to carry out risk assessments

Since the introduction of the Control of Substances Hazardous to Health Regulations in 1988, it has been a requirement to carry out an assessment of the risk to health created by work involving hazardous substances, including legionella. However, Barrow Borough Council failed to assess these risks, and there was no legionella control scheme.

The recommendations stated that whoever is in charge of identifying and assessing the risk of exposure to legionella bacteria must have the required ability, experience, information, instruction, training, and resources.

Barrow Borough Council did not correctly manage contractors, which contributed significantly to the outbreak. Also, the Council did not agree on what water management work contractors would carry out, and it did not verify whether the contractor had carried out the work.

The report recommended that contractors employed for legionella control inform the responsible person for the cooling tower of any problems both orally and in writing. Also, the responsibilities of water treatment companies and water cooling tower operators should be clearly written in contracts to avoid any ambiguity.

Good practice → Ensure that your contractors have the right accreditations

Staff responsible at Barrow Borough Council who were responsible for the management of the control of legionella should have received adequate training, ensuring their competence. Health and safety training was only available to workers reactively.

The report emphasised that the Health and Safety at Work Act 1974 places a duty on employers to provide training to ensure health and safety standards. Employees who carry out Legionella control measures must be trained to a standard that ensures tasks are performed competently.

Although many people were at fault, Gillian Beckingham was singled out for her acts and omissions. She did not apply her expertise in contract procurement and did not follow up on concerns the contractor raised with her.

The report highlighted that individual employees cannot hide behind their organisation—it is their personal duty to protect people under their care.

The incident in Barrow, Cumbria, was a tragic example of how not acting can have disastrous consequences—but an excellent advert for Legionella prevention.

Fortunately, people became more aware of the risks from legionella bacteria as a result of the Barrow Report. While legislation has changed since it was published in 2006, the critical advice remains: it is imperative that building managers, landlords, and employers understand the health risks associated with Legionella, know when they should test, and carry out a risk assessment. 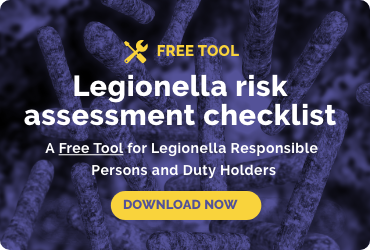