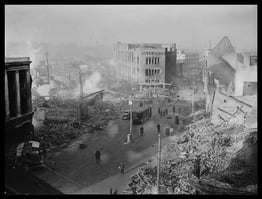 In the months following the British Army’s withdrawal from Dunkirk, the Second World War entered a new phase – The Blitz. Night after night, German aircraft bombed Britain’s major cities, particularly those whose industries were vital to the allied war effort. At the very top of that list was the city of Coventry, with its numerous aircraft manufacturing and munitions related industries. Throughout the Blitz it was targeted no less than 17 times in Luftwaffe raids, with predictably devastating impact on the civilian population and city itself. Red Cross volunteer Dilwyn Evans was on duty in Coventry on the night of 14th October 1940 when the largest raid of all, conducted by over 500 German aircraft, devastated the city centre and it’s medieval cathedral.

The Coventry raid lasted from about 7 o’clock at night until about half past five the next morning. First of all they sent a wave of planes over with incendiary bombs which they dropped on the city, lighting it up. As soon as the city was alight, over came the heavy bombers, and they just dropped everything that they’d got. I was at home, and as soon as I realised how serious things were at about nine o’clock, I got on my bike and went in to the city centre, and when I got there I had to carry my bike over rubble on the roads. That night was dramatic, I can remember walking past the council housing in the city centre, everything was burning away. Debris all round. A lot of people were going about trying to find relatives, friends, goodness knows what. The fire fighting service was getting through, but once the mains were out of action, all the firemen could do was stand by and watch it burn itself out.

In that one raid alone in November 1940, more than 550 people were killed and 4,300 homes destroyed. Such was the destruction caused to Coventry during the Blitz, German propaganda coined a new word ‘coventrieren’, or ‘coventrate’ – to reduce a city to ruins. ¹ ²