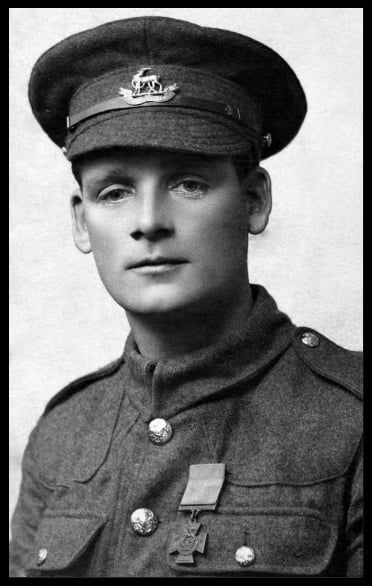 To many, the name ‘Passchendaele’ evokes images of shell shattered landscapes, mud, horrific losses, ill planned offensives and the futility of the war on the Western Front. What is quite often overlooked, beyond the undoubtedly awful conditions, is the determination and bravery of those who fought around the Ypres salient in the autumn of 1917. Those same fields bore witness not only to tragedy, but also to incredible acts of bravery, performed by men from all over the British Empire. Coventry born Private Arthur Hutt was one such man. He was serving with the 7th Battalion Royal Warwickshire Regiment in October 1917 when he performed an act of incredibly gallantry ‘in the field’ which saw him awarded the Victoria Cross. His citation reads:

On 4 October 1917, at Terrier Farm, south-east of Poelcapelle, during the advance on the villages of Poelcapelle and Passchendaele, Belgium, when all the officers and NCOs of No. 2 Platoon had become casualties, Private Hutt took command of and led the platoon. He was held up by a strong post but immediately ran forward alone and shot the officer and three men in the post; between 40 and 50 others surrendered. Later, having pushed too far, he withdrew his party, covering them by sniping the enemy, and then carried back a wounded man to shelter. After he had consolidated his position, he then went out and carried in four more wounded under heavy fire.

Following the award of his VC, the newly promoted Corporal Hutt returned home to Coventry to a hero’s welcome. He was awarded a cheque by the people of the city for £1000 and was instrumental in leading the city’s remarkable funding of more than 250 tanks for the war effort during ‘Tank Week’ in January 1918. Arthur Hutt died in Coventry in April 1954 aged 65. As a mark of the esteem in which Arthur was held by the people of Coventry, more than 350, including several fellow Victoria Cross recipients attended his funeral. A year after his death, a plaque commemorating Arthur’s achievements was erected in his memory in War Memorial Park, Earlsdon. ¹ ²