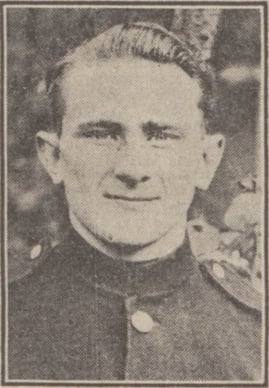 Arthur was born August 8th 1924, to parents John and Elsie Warner, and by 1939 a nearly 15 year old Arthur and his family were living at 72 Owenford Road, in Coventry. Arthur was working as a Butchers assistant while his father John, was working as a Polishers Labourer for a Aero manufacturers. Come 1940, Arthur and his family were now living at 8 Jubilee Crescent, and along with being a butchers boy Arthur would also become a Volunteer messenger attached to the A.F.S.

On November 14th 1940, Arthur began an evening of messenger duty, on a night when Coventry would receive one of its most severe bombing raids of the Second World War. The attack on the city was code-named Operation Mondscheinsonate (Moonlight Sonata), and was carried out by over 500 German bombers. It was intended to decimate the city’s factories and industrial infrastructure, although it was obvious that damage to the rest of Coventry, including residential areas and Monuments would be also be vast.

Through the evening of the 14th, a 16 year old Arthur travelled through areas in the city that had borne the worst of the bombing. He helped to put out a number of incendiary bombs on the way to the first fire incident, which, becoming a target for German bombers, attracted many more high explosive bombs. As a volunteer messenger, Arthur never received any training as a Fireman, but when he found the pump unmanned he immediately picked it up and put it to work on his own, getting water for the men at the branch. Several times, he was soaked to the skin, but he carried on cheerfully. When Arthur was relieved of his position by a Fireman, he was given a message to transmit to his station, and he had just left a telephone box when the blast of a nearby bomb exploding demolished the telephone box leaving the debris on top of him. Fortunately for Arthur, he was able to extricate himself uninjured and carried on with his duties.

Arthur was then detailed to order petrol from the A.F.S. Station and to remain there to change his clothes and rest. He had to walk most of the way due to the roads being impassable for his cycle. Upon arriving at the station, Arthur found the officer was out tackling another fire, so he set out once again to find the officer and eventually found him, delivering his message successfully, this time the Officer ordered him to return to the station and get another messenger to take over his duty. Unfortunately, no other messenger was available to take over, so Arthur travelled to the divisional headquarters with the petrol request, from here he then went back to his crew where he assisted with more fire fighting, before being sent with a message to central fire station to report that Station Officer Harper, who was in charge of the incident, had been seriously injured. Once he had relayed the message and returned to the incident, Arthur propped his bike up against a car and started to search for his crew, as he looked for them both the car and his bicycle were destroyed by a bomb. By the time Arthur had finished his shift he had been out for 13 1/2 hours and he had travelled over 15 miles. Arthur when interviewed after said: “I have been in several raids, but this was the first time I had ever worked a fire-pump. I just carried on with the job and did not have time to think about anything else”.

On August 22nd 1941, it was announced in the Supplement to the London Gazette that Arthur had been awarded the British Empire Medal for his actions on November 14th - 15th 1940 with his notice saying:

"During an Air Raid messenger Warner, acting in the capacity of a Fireman, worked a pump until it ran short of petrol. He then went to his station for supplies and with these he cycled back to the fire and once more carried on, helping the Firemen. Warner performed his duties of messenger during the heavy bombing and showed great courage and determination".

All Arthur would remark when the B.E.M. Was announced was: “Coo! Fancy me winning a medal. I don’t deserve it anymore than the other fellows who were there”. It was around this time that Arthur was becoming quite a keen cyclist in the C.C. Club. In December 1942 Arthur joined the Royal Warwickshire Regiment before being transferring to the 8th Battalion, Parachute Regiment, Army Air Corps soon after.

On Saturday December 11th 1943, Arthur married Betty May Cockerall at St George’s Church, in Coundon, they were living in Poole Road at the time. Just before midnight on June 5th 1944, the 8th Battalion, Parachute regiment took off from R.A.F. Harwell, Oxfordshire and R.A.F. Blakehill Farm, Wiltshire to take part in the Normandy Landings.

Sadly Arthur would be killed in action June 6th 1944, in Normandy at 19 years of age. Arthur was first buried at Butte De La Hogue before later being re-buried on August 27th 1945 at Ranville British Cemetery. Ranville was the first village to be liberated in France when the bridge over the Caen Canal was captured intact in the early hours of June 6th 1944 by troops of the 6th Airborne Division.

The inscription picked by his widow Betty May on his grave stone reads: “Without farewell, he fell asleep, leaving memories I shall always keep. May”