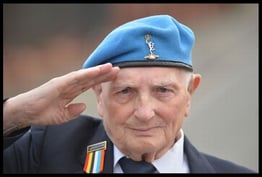 In the years following the Second World War, as the city of Coventry slowly rebuilt, many of its residents who had been childhood witnesses to that destruction, grew up to embark on their own military careers. Coventry raised Bernard O’Brian made the decision before his 18th birthday to join up with the Royal Corps of Signals and soon after found himself in distant Korea, where another major conflict was taking place. Many years later he recalled his experiences.

I left the UK in January 1952, and we took 29 days to arrive in Japan. It was the first time I had ever been abroad, and it was quite an experience. The biggest shock was when they called our detachment on to a smaller boat and sent us straight over to Korea, we arrived in a very cold winter. Korea was like that, very hot summers, and very cold winters, and we always seemed to be hungry. The summers were particularly bad as so many people got Tinea, a sweat rash, which was just like stinging nettles all over your back. It was a tough time, but it made men out of everybody. You accepted it and got on with it. One thing that sticks in my mind, was just how much better off the Americans were than us. I was working with an American detachment at one time, and they invited me in to their canteen – you wouldn’t believe what they had; coffee machines, chicken, and all sorts – even pineapples! We still had rationing back home at that time, so it was amazing to see. There were difficult times too. One day I was laying telephone lines with my mate and we stood there listening to these shells going over – then we realised that they weren’t outgoing but incoming! I got caught in the open a few times and you would jump into what they called ‘Monsoon ditches’ for cover. Actually, one of my biggest phobias out there, working in the paddy fields, was snakes. They make me shudder and they were everywhere!

The main thing though, was everyone out there had a job to do, and we just got on with it. That’s how it was. When I came home after 18 months abroad, there was no band, no welcome, if was just ‘off you go’, no-one asked me about my time in Korea. They call it the forgotten war, but it wasn’t forgotten by the people who were there.

Following his return from Korea, Bernard O’Brian kept a newspaper cutting naming all of his comrades who lost their lives between 1950-1953 and in 2021 successfully campaigned to have a commemorative bench, plaque and garden created in Coventry remembering those who gave their lives in the conflict. ¹ ²