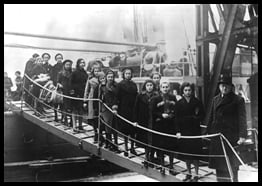 In the months prior to the outbreak of the Second world Wear, many Jewish families in Germany and Austria were subject to increasingly oppressive and brutal sanctions. In a bid to save their lives, many parents fought to have their children sent alone to safe havens outside of Nazi control.

One such family were the Sadans from Munich. Over the course of several months in 1939 all three children were sent on special trains, known as ‘Kindertransports’ to England, to there be hosted by a volunteer family. The Sadan children were amongst the lucky ones, eventually reaching safety with a willing couple in Coventry.

I was born in Munich Germany in 1930 and went to Kindergarten where I found out early what Jews were all about. I was born into the Hitler Era, I didn’t know anything else. Even at that time I was hit by the bigger girls – I just thought that was life was like. I then went on to a Jewish School at the age of six. My parents owned a laundry and they worked terribly hard – we hardly ever saw them. Then on November 9th 1938 everything changed. That was ‘Kristallnacht’. The day before everything had been normal, the next morning my brother and I went to school and there was a peculiar smell in the air, but as we went to school we saw the synagogue on fire, and the school too. We went back to the shop and there were a couple of nazis standing there.

On January 4th my brother and sister managed to get on the first Kindertransport out of Munich, I was left alone. I was too young to go alone so I waited and waited, then eventually on 6th July it was my turn. I vividly remember crossing the border from Germany to Holland, the atmosphere changed suddenly. All of a sudden it was peaceful, and people were kind to us, our first taste of freedom.

The next thing I remember was coming in to Liverpool Street Station and we were put in to a huge hall and names were being called out. After a few hours I was the only one left and I was put on a train to Coventry. There I was on the platform all alone, nobody there and all of a sudden it was a whirlwind, there was my sister running down the platform.

The following Monday I went to school in Coventry for the first time, and the children and teachers were very very kind. All I could say was please and thank you, and within 6 months I had learnt English perfectly. Life in England was so leisurely, so nice, there wasn’t all this terrible tension we had had in Germany.

Inge Sadan and her siblings were evacuated from Coventry to the north of England. Despite not hearing from her parents for a considerable period of time – the entire family were eventually reunited in Coventry in 1944. ¹ ²